Your cart is empty! Please check out our store or view our wide range of brands.

As popular legend has it, Saint Patrick rid Ireland of snakes. however, it is believed that there haven’t been snakes in Ireland since the last ice age. The ‘snakes‘ legend is thought to be an analogy for druids or pagans that used to worship snake or serpent gods. Saint Patrick laid the foundations not only for the Catholic Church in Ireland but for all of Western Europe. As such deserves the title, yet to be bestowed, of Co-Patron of Europe along with Saint Benedict, Saint Teresa Benedicta of the Holy Cross (Edith Stein), and Saint Bridget of Sweden. Saint Patrick died in Armagh in 461AD and is said to be buried under Down Cathedral in Downpatrick, Northern Ireland. Today, Downpatrick is renowned for its St.Patrick Centre, an essential stop off if you’re visiting the North of Ireland! 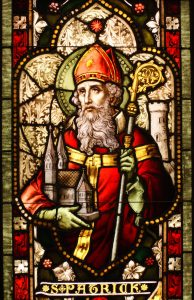 Are you celebrating Saint Patrick’s Day this year? Send us pictures of the parades and events here or tag us on Facebook and Instagram.

For exclusive offers, upcoming sales and contests, enter in your details below.

Easter Sale Now On!!! 20% off Everything when you spend Over €50 Dismiss

Our website uses cookies so that you can place orders and to give you the best possible shopping experience on our site. By using this site, you agree to the use of cookies. If you continue to use this site we will assume that you are happy with this.
Find out more about cookies here or check out our privacy policyOkNo